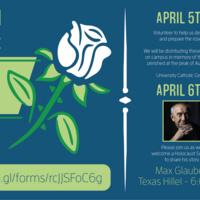 On April 5th, we will cut and de-thorn roses at the University Catholic Center. On April 6th, we will hand out 10,000 white roses in commemoration of the 10,000 individuals who died every day in Auschwitz during the Holocaust. We will also host Max Glauben, a holocaust survivor, who will share his inspiring story of hardship, resilience, and humanity.

For twelve years The White Rose Society has engaged thousands of students, organizations, and university staff members in an effort to remember the Holocaust and prevent future atrocities. This year we call particular attention to the human rights crisis in Syria and to the plight of over 11 million Syrian refugees. The task at hand is monumental and we could not, nor would not want to do it alone.