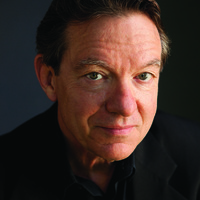 Lawrence Wright is a staff writer for The New Yorker and the author of six previous books of nonfiction, including In the New World, Remembering Satan, The Looming Tower, Going Clear, Thirteen Days in September, The Terror Years, and one novel, God’s Favorite. His books have received many prizes and honors, including a Pulitzer Prize for The Looming Tower. He is also a playwright and screenwriter. He and his wife are longtime residents of Austin, Texas. His current book, God Save Texas, was published in April 2018.

Seating for the lecture is first-come, first-served, and doors will open for seating at 6:30 p.m.

After the lecture, Mr. Wright will be signing copies of God Save Texas, recently released in paperback, which will be available for purchase at the Blanton Museum gift shop.

The Edgar A. Smith Building is directly across from the Blanton Museum of Art, and public parking is available at the nearby Brazos Garage or AT&T Conference Center Garage (hourly rates apply).

Each year Plan II is fortunate to be able to invite prominent speakers to campus thanks to a generous gift from Julius and Suzan Glickman. Julius Glickman, a Plan II major, received his BA from the University of Texas at Austin in 1962 and his LLB from the University of Texas School of Law in 1966. As a UT student, Mr. Glickman was student body president ('62-'63), outstanding student and an active member of the Friars, Silver Spurs and the Tejas Club.

The Glickman Lectureship is always free and open to all.

For more information on this Speaker please visit www.prhspeakers.com