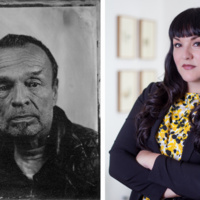 Daniel Joseph Martinez will give a performative lecture that will be followed by a conversation with Pilar Tompkins Rivas. The conversation will center on Martinez’s expansive practice and developments in the framing of artistic production engaged in political and social critique in recent decades.

This lecture is underwritten by the Viola S. Hoffman and George W. Hoffman Lectureship in Liberal Arts and Fine Arts.

Daniel Joseph Martinez is a Los Angeles-based artist and educator who engages in an interrogation of social, political and cultural mores. Operating with fluidity and as open source manifestations not bound by any singular category, his works extend from the ephemeral to the solid. Martinez’s practice takes the form of text, sculpture, photography, painting, installation, robotics, performance and public interventions to unapologetically question issues of the politics of race, personal and collective identity, vision and visuality, and the fissures formed between the appearance and the perception of difference.

Martinez represented the U.S. in 11 biennials worldwide, including the Venice Biennial (1993); Istanbul Biennial (2011); Lyon Biennial, France (2013); among others, and received numerous fellowship awards. Most recently, Martinez was the recipient of The Headlands Center Residency, San Francisco (2019). His work can be found in public collections in the United States including the Whitney Museum, the Museum of Modern Art, New York, the Museum of Contemporary Art, Los Angeles; Museum of Fine Arts Houston, MFAH; and the Linda Pace Foundation, San Antonio, Texas. Committed to artist-run and not for profit galleries and organizations, Martinez was a co-founder of Deep River and LA>

Martinez is a Donald Bren Distinguished Professor of Art at the University of California at Irvine; he teaches in the Graduate Studies Program, New Genres Area and Critical & Curatorial Studies. He lives and works in the Crenshaw District in South Los Angeles.

Pilar Tompkins Rivas is the director of Vincent Price Art Museum (VPAM) at East Los Angeles College, a collecting institution with diverse holdings including Pre-Columbian, Native American, and modern and contemporary art. At VPAM she has spearheaded partnerships between the museum and the Smithsonian, the Los Angeles County Museum of Art (LACMA), and the Huntington Library, Art Collection and Botanical Gardens. Prior to her appointment as director, she served as the coordinator of curatorial initiatives at LACMA, where she helped launch and co-directed two Mellon-funded programs for the museum: the UCLA-LACMA Art History Practicum Initiative and The Andrew W. Mellon Undergraduate Curatorial Fellowship Program. She has practiced as an independent curator since 2002, and was the director of residency programs at 18th Street Arts Center in Santa Monica.