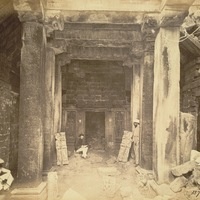 A Glorious Galaxy of Monuments: Photography and Archeology in 19th century India

The growth and spread of photography in the second half of the 19th century was contemporaneous with the development of archaeology from the sphere of amateur antiquarianism into a formal discipline. From its inception, photography was seen as an ideal tool of record, and the medium was swiftly adopted by archaeologists.

In India, the use of photography for the documentation of historical architecture was actively (if intermittently) sponsored by the East India Company from the mid-1850s, and this encouragement attracted many photographers to such subject matter. The early history of photography in India was thus intimately intertwined with investigations into the architectural history of the subcontinent, although tensions between the aesthetic ambitions of photographers and a demand for unadorned documentation complicated the reception of much early work. By the time of the formation of the Archaelogical Survey of India in the 1860s, photography had become a standard and required skill for its employees, even if arguments as to its merits compared to other media such as scale drawings and plaster reproductions continued for decades and were never fully resolved. Photography in India sought both to provide a seemingly objective record of architecture and archaeological sites for scholarly study and to popularize the subject for a broader European audience. Often unwittingly, however, photography also often tells us as much about archaeological practice and colonial attitudes in India during this period as about the objects under scrutiny.

This lecture will describe the use of the medium for archaeological documentation during the second half of the 19th century and will examine some of the issues raised in its practice.

John Falconer is an independent scholar, who was for many years Curator of Visual Arts in the British Library, London, where he was responsible for the Library’s collections of prints, drawings and photographs. His particular speciality is the history of photography in South Asia. He has published widely on photography in Asia and has curated numerous exhibitions in this field, both in the United Kingdom and internationally.