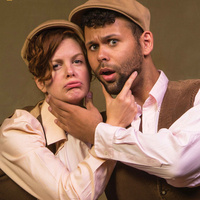 The American Shakespeare Center will return to Austin for its tenth annual visit to the University of Texas campus. Direct from the stage of the American Shakespeare Center's celebrated Blackfriars Playhouse, the ASC touring troupe brings Renaissance drama to life in exciting and accessible performances. On Tuesday, March 5 at 7:00 pm in the Hogg Memorial Auditorium, the ASC's touring troupe will perform Shakespeare's The Comedy of Errors.

And now let’s go hand in hand, not one before another. – V.i

In this rollicking farce, Shakespeare elevates Roman comedy to dizzying heights. Two long-separated twins, their two tricky servants (also twins), a jealous wife, and her lovelorn sister romp through this fast-paced comedy. Filled with mistaken identities and slapstick humor, The Comedy of Errors is one of Shakespeare's most widely celebrated comedic gems.

“What is surprising about this play is that it’s a bit of an existential crisis,” says director Desdemona Chiang. “The Comedy of Errors is a story of the search for the whole, that in searching for your other, you come closer to finding yourself, and in doing so, lose yourself to something greater.”

The 2018/19 Hand of Time Tour is the ASC’s 30th annual tour. Founded as Shenandoah Shakespeare Express in 1988, the ASC grew to international prominence and is now the home of the world’s only re-creation of Shakespeare’s indoor theatre in Staunton, VA. ASC on Tour has performed in 46 US states, one US territory, and five other countries.

The performance will take place on the UT campus at the Hogg Memorial Auditorium.

Parking is available on the street and at UT’s San Antonio Garage.

Tickets are $15 for UT ID holders and students. General admission tickets are $25.

Buy tickets online in advance or at the door.

The theater will open for seating at 7:00 pm. At this time, live pre-show music will also begin. The performance will begin at 7:30 pm. Seats for the performances are available on a first-come, first-served basis, so audience members are encouraged to arrive early, take their seats, and enjoy the music.

This visit is made possible by Shakespeare at Winedale, the English Department, the Iris Howards Regents Professorship, and the Mary Lu Joynes Endowment in the Plan II Honors Program.

Tickets are $15 for UT ID holders and students. General admission tickets are $25.