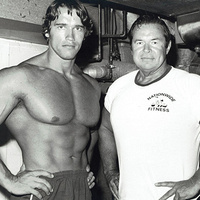 Arnold & Jim: The Friendship that Forged The Arnold Classic

The Stark Center is proud to announce a new exhibit about Arnold Schwarzenegger and Jim Lorimer. The pair became friends, then business partners and founded The Arnold Classic Sports Festival in Columbus, Ohio.

The friendship between Arnold Sports Festival founders Jim Lorimer and Arnold Schwarzenegger stretches back for over five decades. The “Austrian Oak’s” rise to international fame began in 1965 after winning the Junior Mr. Europe competition and his trophy collection grew as he soon added Mr. Universe and Mr. International titles at both the amateur and professional levels. But in 1969, he fell short at the sport’s premier competition—the Mr. Olympia—to his great disappointment.  But Arnold would be back. He made plans to compete at the NABBA Mr. Universe competition in London as a warmup to the 1970 Mr. Olympia; he also wanted to compete at the Mr. World contest in Columbus, Ohio, but the Universe was the day before the Mr. World contest and the Atlantic Ocean separating the two events made that wish seem improbable.

Enter Jim Lorimer, former FBI agent and chairman of the USA Women’s Track and Field Committee, who was becoming known as a quality sports promoter in the late 1960s.  Lorimer wanted Arnold in his Mr. World contest and arranged for a private jet to meet him in New York and fly him to Columbus in time.  And so, on consecutive days, on different continents, Arnold won the Mr. Universe and the Mr. World titles and then took home the Mr. Olympia trophy two weeks later.

Winning the Mr. World title was important to Arnold, but what impressed him more was what Lorimer had done for him and the high quality of the entire contest experience.  Arnold told Lorimer as he left that weekend that he wanted to work with him on promoting bodybuilding when he retired from competition.  Therefore, with only a handshake as a contract, the two men began promoting a few bodybuilding contests and then expanded to include more sports and more competitors until their Arnold Sports Festival was the largest multi-sport festival in the world. Bigger than the Olympic Games in both the number of individual sports and the number of athletes who compete each year, the contest is still held annually in early March.

With the retirement of Jim Lorimer in 2022 at age 93, Arnold decided to send the Lorimer-era archives of the show to The Stark Center for preservation and to ensure that this remarkable episode in American sport history will be remembered. To learn more about the full collection, go to www.starkcenter.org.

Enter the North End Zone of the football stadium at Gate 16. To the left is the Gold elevator lobby. Take the gold elevators to the 5th floor. They will open in our main lobby.

There is no charge for admission.