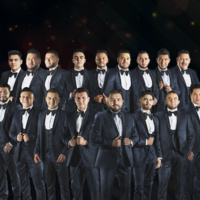 Banda El Recodo is not only one of Mexico's most successful bandas, but one of its most eclectic. For over 80 years, the group has performed a mixture of Latin dance tunes, jazz swing, and classical music. They were the first banda to be recorded and have released more than 200 records, bringing their music from the barrios of Mexico to the international stage. Under the direction of Luis Alfonso Lizárraga, the seventeen-member ensemble consists of four clarinets, three trumpets, a tambora: a bass drum with a cymbal on top, a tarola: a snare drum, a tuba (Sousaphone style), three trombones, two alto horns (saxores) and two singers.

Founded in 1897 and currently under the direction of Carlos Martinez, Mariachi Vargas de Tecalitlán is one of the legendary ensembles of traditional Mexican music. The group has recorded hundreds of albums and have also appeared in films and accompanied many solo artists in their live performances and their recordings.