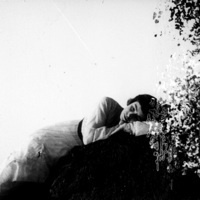 Bill Morrison is one of the most accomplished filmmakers working today whose practice rescues lesser known and forgotten histories while investigating the fragile existence of celluloid materials. His extensive filmography sources rare archival footage as well as 35mm nitrate film in various states of decomposition. Morrison’s work lies between the documentary nature of found footage and the chaotic intervention of nitrate film, with its inclination for entropy. Inhabiting the space between project and destiny, Morrison’s films can be described as a profession of faith in the perseverance of that which seems most doomed to perish.

In Cycles & Loops, his first solo exhibition in Texas, Morrison deconstructs his films to create essential abstractions for the gallery space. The repetitive loops presented in the gallery do not have a beginning or end; instead, they allow the viewer to engage intellectually and emotionally with wavering and untethered relics from history. Together, these ephemeral fragments ask us a deeply existential question: how do we preserve what cannot be preserved? In Cycles & Loops, Morrison offers a response and demonstrates the possibilities for rebirth out of the chaos of decay.

Lead support for this exhibition is provided by Humanities Texas, the state affiliate of the National Endowment for the Humanities.

Additional support comes from 84 individual donors who contributed to a HornRaiser campaign in Summer 2021.

Bill Morrison (b. 1965, Chicago) has premiered films at the New York, Rotterdam, Sundance, and Venice film festivals, and major performance venues around the globe, including the Carnegie Hall, (2004), the Brooklyn Academy of Music (2010 and 2012), and the Barbican, London (2014). His found footage opus Decasia (2002) was the first film of the 21st century to be selected to the Library of Congress’ National Film Registry. The Great Flood(2013) was recognized with the Smithsonian Ingenuity Award for historical scholarship. Dawson City: Frozen Time (2016) was included on numerous lists of the best films of the decade (2010s). His most recent movie is The Village Detective: A Song Cycle (2021). Throughout his career, Morrison has collaborated with some of the most celebrated musicians and composers of our time: John Adams, William Basinski, Maya Beiser, Gavin Bryars, Bill Frisell, Philip Glass, Vijay Iyer, Kronos Quartet, David Lang, Steve Reich, and Julia Wolfe, among many others. His work has been recognized with a Guggenheim Foundation Fellowship (2000); the Foundation for Contemporary Arts (2003); the Creative Capital (2004); Herb Alpert Award in the Arts (2006); and a mid-career retrospective at the Museum of Modern Art (2014).