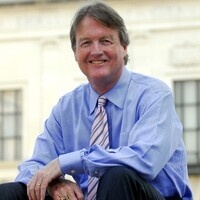 Watch the live stream at: http://www.ustream.tv/channel/utaustin

On April 12, The University of Texas at Austin will celebrate the life of William C. Powers Jr., its 28th president. Powers was an esteemed teacher, nationally recognized legal scholar, and staunch believer in the value of the public research university who defended UT against challenges to its mission.

Powers passed away on March 10 in Austin from complications from a fall several months earlier and from oculopharyngeal muscular dystrophy, a rare adult-onset muscle disorder.

In addition to serving as president from 2006 to 2015, he had been a member of the School of Law faculty for more than 40 years, including six as dean. He taught courses in torts and a freshman philosophy seminar, connecting with thousands of students in his career.

“Bill was an eloquent and fierce champion for UT students, faculty and staff. Never was this more evident than in the early and mid-2010s, when Bill put every ounce of himself into defending the soul of our university,” said President Gregory L. Fenves, who was recruited by Powers to return to UT as engineering dean in 2008. “For 40 years on these Forty Acres, Bill Powers embodied the UT motto, ‘What starts here changes the world.’ He lived those words. But even more importantly, he made sure legions of other Longhorns did too. We’ll miss him dearly.”

Friends who wish to make a donation in memory of President Powers may contribute to the William C. Powers and Kim Heilbrun Endowed Scholarship Fund in the UT Law School Foundation or Foster Angels of Central Texas, where he was a member of the Board of Directors.

Office of the President