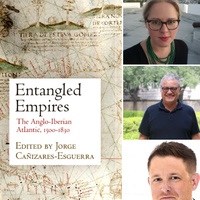 The Institute for Historical Studies in the Department of History, and

the Center for European Studies invite you to:

According to conventional wisdom, in the sixteenth century, Spain and Portugal served as a model to the English for how to go about establishing colonies in the New World and Africa. By the eighteenth century, however, it was Spain and Portugal that aspired to imitate the British. Editor Jorge Cañizares-Esguerra and the contributors to Entangled Empires challenge these long-standing assumptions, exploring how Spain, Britain, and Portugal shaped one another throughout the entire period, from the sixteenth to the nineteenth centuries. They argue that these empires were interconnected from the very outset in their production and sharing of knowledge as well as in their economic activities. Willingly or unwillingly, African slaves, Amerindians, converso traders, smugglers, missionaries, diplomats, settlers, soldiers, and pirates crossed geographical, linguistic, and political boundaries and cocreated not only local but also imperial histories. Contributors reveal that entanglement was not merely a process that influenced events in the colonies after their founding; it was constitutive of European empire from the beginning. The essays in Entangled Empires seek to clarify the processes that rendered the intertwined histories of these colonial worlds invisible, including practices of archival erasure as well as selective memorialization. Bringing together a large geography and chronology, Entangled Empires emphasizes the importance of understanding connections, both intellectual and practical, between the English and Iberian imperial projects. The colonial history of the United States ought to be considered part of the history of colonial Latino-America just as Latin-American history should be understood as fundamental to the formation of the United States.

Entangled Empires emerged from an intensive workshop that brought together faculty and graduate students in the History Department at UT Austin and other leading scholars in the field. This book talk will reflect on the student-driven process of organizing both the conference and the book project, and discuss how this model can work to create valuable publication and networking opportunities for other groups at UT.

Kristie Flannery is a Ph.D. Candidate in the History Department at UT Austin. She is an Australian born, Austin-based scholar of colonialism and its legacies in the Iberian world. She has been awarded national and international prizes and fellowships including from the Newberry, Huntington, and Lilly Libraries, the Journal of Pacific History, and the Universidad Nacional Autónoma de México (UNAM). Kristie is in the final stages of writing her dissertation, "The Impossible Colony: Piracy, the Philippines, and Spain's Global Empire.” Read more about Kristie’s work at: https://liberalarts.utexas.edu/history/graduate/gradstudents/profile.php?id=kpf294

Brad Dixon received his Ph.D. in History at the University of Texas at Austin in 2018 for his dissertation, “Republic of Indians: Law, Politics, and Empire in the North American Southeast, 1585-1715.” His work has received support from the Social Science Research Council, the Library Company of Philadelphia, the New England Regional Fellowship Consortium, the John Carter Brown Library, and the North Carolinian Society. Brad has published book chapters and articles, and has presented at numerous conferences, including as a co-organizer of the “Entangled Histories of the Early Modern British and Iberian Empires” workshop held at UT. He is a postdoctoral fellow at the Institute for Historical Studies at UT Austin this year. Read more about Brad’s work at: https://liberalarts.utexas.edu/history/news/13090

Jorge Cañizares-Esguerra is the Alice Drysdale Sheffield Professor of History at the University of Texas Austin. His books include How to Write the History of the New World (2001), Puritan Conquistadors (2006), and Nature, Empire, and Nation (2007). Read about his work on his faculty profile page (https://liberalarts.utexas.edu/history/faculty/jc5543), and in this recent year-in-review article: https://liberalarts.utexas.edu/history/news/12859.

Please RSVP to cmeador@austin.utexas.edu to receive a copy of a short reading selection from the book. This discussion is part of the History Faculty New Book Talk Series at the Institute for Historical Studies.