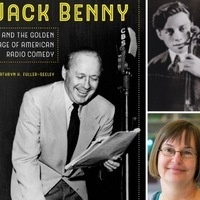 The Institute for Historical Studies in the Department of History invites you to: "Jack Benny and the Golden Age of American Radio Comedy”

The king of radio comedy from the Great Depression through the early 1950s, Jack Benny was one of the most influential entertainers in twentieth-century America. A master of comic timing and an innovative producer, Benny, with his radio writers, developed a weekly situation comedy to meet radio’s endless need for new material, at the same time integrating advertising into the show’s humor. Through the character of the vain, cheap everyman, Benny created a falla guy, whose frustrated struggles with his employees addressed midcentury America’s concerns with race, gender, commercialism, and sexual identity. Kathryn H. Fuller-Seeley contextualizes her analysis of Jack Benny and his entourage with thoughtful insight into the intersections of competing entertainment industries and provides plenty of evidence that transmedia stardom, branded entertainment, and virality are not new phenomena but current iterations of key aspects in American commercial cultural history. Read more about Jack Benny and the Golden Age of American Radio Comedy (University of California Press, Oct. 2017).

Recently featured on Not Even Past:
https://notevenpast.org/eddie-anderson-the-black-film-star-created-by-radio/

"Jack Benny built his career on letting his second bananas cut him down to size, but media scholar Kathryn Fuller-Seeley knows a giant of twentieth-century entertainment when she sees—and hears—one. A meticulous researcher, sensitive critic, and unabashed fan, Fuller-Seeley examines the sonic wraparound and cultural reverberations of Benny’s comic art and discovers an atmosphere thick with the buzz of ethnic, racial, and gendered static—not to mention some seriously funny gags, wisecracks, voices, and sound effects. Like its subject, Jack Benny and the Golden Age of American Radio Comedy is tone-perfect and a delight to dial in to." —Thomas Doherty, Brandeis University

Kathryn H. Fuller-Seeley is Professor in the Radio-Television-Film department at the University of Texas at Austin. She is the author of, among other books, At the Picture Show: Small Town Audiences and the Creation of Movie Fan Culture and the editor of Hollywood in the Neighborhood: Historical Case Studies of Local Moviegoing. Dr. Fuller-Seely was awarded the prestigious Theatre Library Association’s Richard Wall Memorial Special Jury Prize for “exemplary work in the field of recorded performance,” presented this past week at the New York Public Library's Performing Arts Division (read more here).

To reserve your seat and receive a copy of the reading selection to be discussed, please email cmeador@austin.utexas.edu.