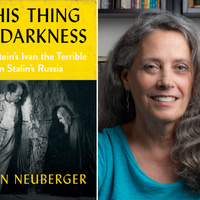 A book talk and discussion with
Joan Neuberger
Professor of History, and
Editor, Not Even Past
University of Texas at Austin
Dr. Neuberger's web site and faculty profile page

Sergei Eisenstein's unfinished masterpiece, Ivan the Terrible, was no ordinary movie. Commissioned by Joseph Stalin in 1941 to justify state terror in the sixteenth century and in the twentieth, the film's politics, style, and epic scope aroused controversy even before it was released. In This Thing of Darkness, Joan Neuberger offers a sweeping account of the conception, making, and reception of Ivan the Terrible that weaves together Eisenstein's expansive thinking and experimental practice with a groundbreaking new view of artistic production under Stalin. Drawing on Eisenstein's unpublished production notebooks, diaries, and manuscripts, Neuberger's riveting narrative chronicles Eisenstein's personal, creative, and political challenges and reveals the ways cinematic invention, artistic theory, political critique, and historical and psychological analysis went hand in hand in this famously complex film.

Neuberger's bold arguments and daring insights into every aspect of Eisenstein's work during this period, together with her ability to lucidly connect his wide-ranging late theory with his work on Ivan, show the director exploiting the institutions of Soviet artistic production not only to expose the cruelties of Stalin and his circle but to challenge the fundamental principles of Soviet ideology itself. Ivan the Terrible, she argues, shows us one of the world's greatest filmmakers and one of the 20th century's greatest artists observing the world around him and experimenting with every element of film art to explore the psychology of political ambition, uncover the history of recurring cycles of violence and lay bare the tragedy of absolute power.

Joan Neuberger is Professor of History at the University of Texas at Austin. She studies modern Russian culture in social and political context, with a focus on the politics of the arts. She is the author of an eclectic range of publications, including Hooliganism: Crime and Culture in St Petersburg, 1900-1914 (University of California Press, 1993), Ivan the Terrible: The Film Companion (Palgrave Macmillan, 2003); co-author of Europe and the Making of Modernity, 1815-1914(Oxford University Press, 2005); and co-editor of Imitations of Life: Melodrama in Russia (Duke University Press, 2001) and Picturing Russia: Explorations in Visual Culture (Yale University Press, 2008), Everyday Life in Russian History: Quotidian Studies in Honor of Daniel Kaiser (Slavica, 2010); and The Flying Carpet: Studies on Eisenstein in Honor of Naum Kleiman(Mimésis International, 2017). Her new book, the subject of this discussion, is This Thing of Darkness: Eisenstein’s Ivan the Terrible in Stalin’s Russia (Cornell University Press, March 2019). Prof. Neuberger's teaching interests include modern Russia, nineteenth-century Europe, film, and visual culture. She also teaches undergraduate and graduate courses in Public History. She is Editor of the History Department's public history website, Not Even Past and co-host, with Christopher Rose, of the history podcast series, 15 Minute History. She is Editor of the new website Thinking in Public: Public Scholarship at UT Austin.

Please RSVP to cmeador@austin.utexas.edu to reserve your seat and receive a copy of the reading selection to be discussed. This discussion is part of the IHS' History Faculty New Book Talk Series.

Sponsored by: Institute for Historical Studies in the Department of History; Center for European Studies