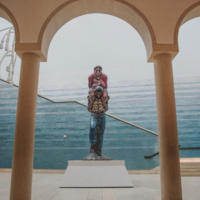 Luis Jiménez lived most of his life in the American Southwest. Born in 1940 and raised in El Paso, Texas, he later settled in New Mexico, where he died in 2006. This area of the U.S., so near the border with Mexico, helped shape Jiménez’s artistic vision and his unique rasquache – or “underdog”– flair. Border Vision: Luis Jiménez’s Southwest explores his insightful and critical perspective on this region by focusing on key themes in his art: the history of western expansion and its lasting impact on Indigenous populations along the borderlands; the beauty and diversity of the local wildlife; and the vibrant contributions that immigrants and well-established Mexican Americans have made to the Southwest. Anchored by a selection of the Blanton’s extraordinary holdings of Jiménez works, this show seeks to celebrate the prominent Mexican American artist and recognize the enduring relevance of his artistic legacy.