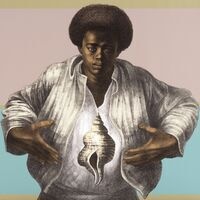 One of two exhibitions on acclaimed American artist Charles White at UT this fall, Charles White: Celebrating the Gordon Gift features drawings, color lithographs, album covers, and more by Charles White as well as works by those in his circle. Born in 1918 in Chicago, White dedicated his life and artistic practice to creating a visual archive of the Black experience in the United States. Fighting against widely circulating racist and grotesque representations of Black people, White created images of African Americans endowed with “truth, dignity, and beauty.” The Blanton’s exhibition foregrounds White’s connection to his contemporaries and his participation in larger social and political movements in his life-long career as an artist, activist, and educator. To see more works by Charles White, visit Charles White and the Legacy of the Figure, which examines White’s influence on contemporary artists, at the Christian-Green Gallery.

Image: Charles White, Awaken from the Unknowing, 1961, compressed charcoal and brown and gray vine charcoal with scratching out, blending, and erasing on cold-pressed illustration board, 31 x 56 in., Gift of Susan G. and Edmund W. Gordon to the units of Black Studies and the Blanton Museum of Art at The University of Texas at Austin, 2014 ©The Charles White Archives