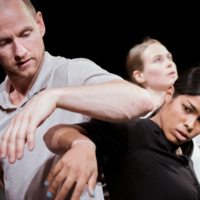 Deborah Hay is an internationally renowned choreographer whose unique approach to movement forever changed how the world makes and views dance. Hay is recognized as a pivotal figure in the development of post-modern dance and her work as a founding member of the iconic 1960s Judson Dance Theatre in New York, one of the most radical and influential post-modern art movements is legendary.

Based in Austin since 1976, Hay recently established her archive at the Harry Ransom Center, a major destination for the study of dance, theatre, and film at UT Austin. She continues to create new work and evolve her practice at 80 years old. When pandemic-induced closures made the debut of her latest work with renowned Swedish contemporary dance company Cullberg impossible, Hay shifted gears. A series of solos were captured on video from the stage of Texas Performing Arts’ McCullough Theatre to allow the artistic dialog to continue. The resulting work, Horse, the solos, is a meditation on the climate crisis and modern survival, with new music by Austin-based composer Graham Reynolds. “Horse, the solos is choreographed in a manner that relies on an intuitive understanding of risk, efficiency, and survival. There is control in efficiency but not risk-taking. Combined they establish the conditions for [the work],” says Hay.  For its U.S. premiere, Graham Reynolds will perform the music live for the first time.  The program will open with a rare solo performance by Deborah Hay.

A performance of Hay’s 2004 masterpiece The Match will kick off a day of performance, discussion, and film screenings. This iconic work contains meditation-like exercises that invisibly bind the dancers to the material by establishing a mental, emotional, and bodily rigor visible in the performance. Time Out, New York proclaimed “The Match is a fascinating, vibrant battle of wits that unfolds through a silent score of movement.”