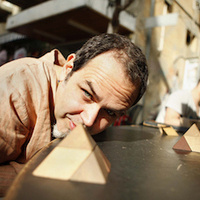 Demo/Lecture: Cuban Guitarist Pavel Urkiza on the History of Bolero

Join this intimate lecture/demonstration with visiting Cuban guitarist Pavel Urkiza and Ensemble Congrí as they explore the history of bolero music.

Texas Performing Arts welcomes Cuban guitarist and composer Pavel Urkiza and his Congrí Ensemble to UT Austin for a weeklong music residency. On November 9, they will perform Songs of Cuba: 1851–1941, an exploration of the ancestral connections of music with songs that are part of Latin American popular heritage, learned and transmitted from generation to generation. Presented in a chamber format and accompanied by visuals from the era and historical narration, the pieces are performed on period acoustic instruments such as the romantic guitar, the mutto cornet, baroque flutes, and upright bass.

Recognized as a master musician for his contributions to contemporary Cuban music, Pavel Urkiza is considered one the most skilled and innovative popular music composers andperformers from Cuba. Pavel has produced over 10 of his own albums and more tan 15 of other musicians. He has a strong passion for Ibero- American music and art,
which has been the subject of his most recent CD and documentary.

Daniel Bernaza graduated in 2000 from Cuba’s National School of Music as clarinetist and professor of chamber music and later studied classical recorder in Spain and cornet in France. He has played and toured with world-renowned musicians and ensembles and under the direction of masters such as Gabriel Garrido, Joseph Cabré, and Shalef Ad-El.
Daniel has recorded more than 10 albums.

Rigel Pérez has a music degree in percussion from the Amadeo Roldan Music Conservatory in Havana. He plays the full spectrum of Cuban percussion; drum set; Flamenco Cajón, and has recently incorporated North African and Middle Eastern instruments into his repertoire. He’s had the honor to play with many modern-day icons of Cuban music
and has participated in the Lincoln Center Jazz Band under the direction of Wynton Marsalis.