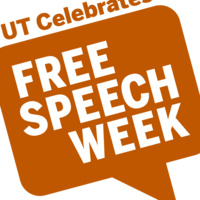 Can we really be fully human without free speech? Is free speech the oxygen of our society? Take part in the debate about the role of free speech for democracy and political freedom. Filmmaker Tarquin Ramsy began shooting “Free Speech Fear Free,” which has been shown at film festivals around the world including Cannes, when he was 15. It asks important questions about the role of free speech in society and features interviews with prominent people like actor Jude Law, former CIA agent John Kiriakou and Wikileaks founder Julian Assange. It examples the impact of surveillance on free speech and shares stories from the U.S., UK, Belarus, Germany and many other countries.

Join Moody College School of Journalism and Media Associate Professor Amy Sanders for a screening and moderated discussion of the 2016 documentary.