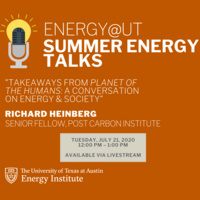 Energy@UT Summer Energy Talk: Takeaways from Planet of the Humans - A Conversation on Energy & Society

Directed by Jeff Gibbs with Michael Moore as Executive Producer, Planet of the Humans (PotH) was published on YouTube for free viewing on April 21, 2020—just before the 50th anniversary of the first Earth Day. The film sparked controversy among the environmental community by questioning whether many environmental organizations are actually preserving the environment and progressing toward lower greenhouse gas emissions, while avoiding issues related to population pressure, the high levels of consumption in rich countries, and the limits of modern industrial renewable energy technologies. Richard Heinberg’s role in the film and his experience as the author of over a dozen books informs his perspective on what it got right, what it got wrong, and why the film presented the subject matter in such a direct and controversial manner.

Guest Biography: Richard Heinberg is Senior Fellow at the Post Carbon Institute and the author of several books on energy and the environment, including Afterburn: Society Beyond Fossil Fuels, and Our Renewable Future with David Fridley. A frequent lecturer on energy and climate issues whose writing has been published in outlets such as Nature and Wall Street Journal, Heinberg’s work is cited as one of the inspirations for the international Transition Towns movement, which seeks to build community resilience ahead of climate change and reduce society’s dependence on fossil fuels. He and his wife Janet live in an energy-efficient Permaculture home in Santa Rosa, California.

This talk will be presented remotely via Zoom and on the Energy Institute's YouTube channel. See access details below.