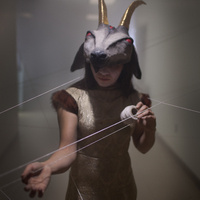 HAINT is an immersive, three-channel video installation by Austin-based artist and curator Alyssa Taylor Wendt. Filmed over the course of three years in Croatia, Detroit, and Texas, the individual channels unfold in counterpoint with one another to create a haunting meditation on the ways we process history, both as individuals and as a culture. The piece draws on motifs from Wendt’s personal cosmology and explores the associative powers of perception, cycles of history and ruination, and the spiritual energy that objects, the landscape, and architectural spaces carry with them. Using Eastern European songs, voiceover, opera, black metal drones, and ambient sound, HAINT combines images of post-war architecture, monuments, and ruins to create a poetic investigation of war, memory, and storytelling. In addition to the video, the exhibition includes sculptural elements and a collection of staged production photographs that intersect with the video’s multifaceted narrative.