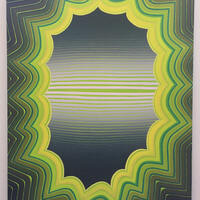 The 21st century is marked by a dramatic shift in the way humanity relates to the natural world, ranging from the emergent effects of global climate change to an increase in transnational immigration. National borders are being redrawn and walls are being built. Huge tracts of land are being transformed by over-farming, strip-mining, and massive building developments. Each sliver of physical land is now something to be photographed, Instagrammed, mapped, digitized, owned, and appropriated. Identity is inscribed in all space, artificial and natural, virtual and real. Site—while seemingly indicative of actual place—is succumbing to the delocalizing influences of an increasingly globalized, interconnected world.

As an art historical genre, landscape is experiencing a quiet yet meaningful resurgence as an active site of exploration for emerging and established artists alike. This exhibition showcases the work of five young female artists—Beverly Acha, Brooke Frank, Renee Lai, Marta Lee, and Iliana Ortega. While owing a debt to historical genres, their work is difficult to categorize and wholly contemporary, addressing the aesthetic, social, and political concerns of a creative generation in the second decade of the 21st century. Among these works, the interplay between material and formal characteristics, between our nostalgia for the unspoiled landscape and its current condition, is as rich as it is varied. These works quietly transcend conceptual and generic definitions typically drawn by critics, while unspooling the myriad ties between art, nature, and the built environment, including the “white cube” of the gallery itself.

This exhibition is organized by Gilles Heno-Coe, Ph.D. candidate in Art History, in collaboration with the artists. It is supported by Center Space Project.

Brooke Frank (b. Myrtle Beach, SC) was raised and attended college in South Florida before moving to Austin, TX, where she is an MFA candidate in Painting at The University of Texas at Austin. She has completed artist residencies at IS Projects (FL, 2016), Art Farm (NE, 2016) and the Jaffe Center for Book Arts (FL, 2016), as well as the Arts Administration Fellowship at the Girls’ Club Collection in Ft. Lauderdale, FL. She is also a collaborator in the art-writing collective The Cabbage Palm.

Renee Lai (b. 1992, Los Angeles, CA) is an artist living in Austin, Texas. She is a MFA candidate at UT Austin in Studio Art, concentrating in painting. She studied at Dartmouth College, where she graduated with honors in Studio Art and English. She has exhibited in New York City, Austin, TX, and Hanover, NH.

Marta Lee (b. 1992, Moscow, ID) grew up in Pullman, Washington and received her BFA in Studio Art at the University of Tennessee at Knoxville and her MFA in painting from the University of Texas at Austin. Her work juggles logic and intuition within a stubborn commitment to painting, music, and the space between ourselves and others. In 2017, she was an exchange fellow at the Royal College of Art in London and a fellow at the Fire Island Artist Residency on Long Island, NY. She has had solo exhibitions in New York City, Knoxville, TN, and Austin, TX.

Gilles Heno-Coe (b. 1986, Pittsfield, MA) received his BA from Williams College and his MA in art history from the University of Texas at Austin, where he is currently pursuing his PhD in modern and contemporary art history. He was previously an associate director at Matthew Marks Gallery in New York, where he helped organize retrospective exhibitions on artists including Brice Marden, Albert York, and Michel Majerus. His research interests include abstract painting and sculpture, the intersection of art theory and practice, connoisseurship and the art market, and artistic techniques and materials. He has published essays on the work of artists including Jasper Johns, Ellsworth Kelly, and others.

Center Space Project is the Visual Arts Center’s student-run arts organization. CSP provides opportunities for UT students interested in participating in a larger artistic community. The organization fosters dialogue between students, curators, critics, gallerists, and artists. CSP members create an environment in which art can be experienced, discussed, and analyzed. Members contribute their unique interests and skills to the collaborative production of exhibitions and events at the VAC and beyond.