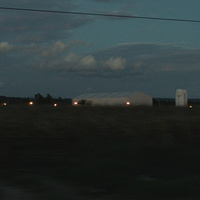 Exhibition // Cómo hago para recordar / What I do to remember

Juan Pablo González’s films are poetic and atmospheric portrayals of everyday life within central Mexico where he was born and raised. Disconnected from the major metropolitan centers that figure prominently in the U.S. media, many of these small, rural communities have been negatively affected by the economic changes since The North American Free Trade Agreement (NAFTA) was enacted in the mid-1990s. The resulting shifts—such as a loss of agricultural jobs, leading to economic instability for many—have also made a significant impact on the social dynamics of the region. These conditions form the backdrop to many of González’s films, which focus on the lives and relationships of the communities who live in remote areas of the Mexican countryside. Capturing intimate moments with vivid but subtle acuity, Gonzalez’s narratives unfold in an unobstructed and direct way, depicting the circumstances of everyday life.

Juan Pablo González: Cómo hago para recordar / What I do to remember considers the roles of landscape, time, and memory within González’s practice. Taking his 2017 film Las Nubes as a point of departure, Cómo hago para recordar includes the original film with a new multi-channel installation comprised of views of the landscape where Las Nubes was filmed. These moving images appear alongside an on-going series of photographs that function as a visual archive of the locations of several of González’s films.

Juan Pablo González (b. 1984, Atotonilco El Alto, Jalisco, México) received a BA from Tecnológico de Monterrey (2007) and a MFA from The University of Texas at Austin (2012). González was named one of Filmmaker Magazine’s “25 New Faces of Independent Film” in 2015. His films have been screened at Ambulante Documentary Film Festival (2019, 2018); the Rotterdam International Film Festival (2018); the Lincoln Center of New York, Neighboring Scenes: New Latin American Series (2018); the Mexico City Cinematheque (2018); IDFA (2018, 2014); Festival de Nuevo Cine Latinoamericano en la Habana (2017); and La Semaine de la Critique at Cannes (2015) amongst others. He received a grant from the Mexican National Fund for Culture and Arts (FONCA) and his work has been supported by the Sundance Institute, the Austin Film Society, the Mexican Film Institute, and the Venice Biennale. He currently teaches in the Film Directing Program at the California Institute of the Arts.