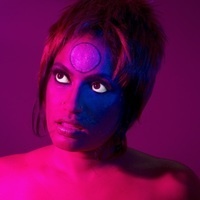 Elia Alba’s multifaceted project The Supper Club comprises fifty-eight portraits of contemporary artists of color and a series of salon-style dinners that serve to stimulate critical exchange and community. At these dinners, artists, art historians, critics, and curators bring issues to the table that facilitate timely discussions on race, ethnicity, gender, violence, homophobia, the AIDS pandemic, sanctuary, and safety. Initially envisioned as a short-term project, Alba organized three dinners with artists she had recently photographed. Since 2012, the artist has hosted twenty-eight dinners with close to four-hundred participants.

Shot with the editorial language of celebrity portraiture and fashion photography, Alba’s portraits are inspired, in part, by Vanity Fair’s annual “Hollywood” issue. While the series critiques the exclusive nature and power of the media, the photographs are also a nod to the accomplishments of her peers. In Alba’s vibrant and theatrical portrayals, her sitters assume mythical qualities with recognizable monikers such as The Shaman, The Professor, or The Hero. In some cases, she presents the artists using the language of art history, drawing on sources such as Frida Kahlo’s self-portraits, Botticelli’s Birth of Venus, works by Sir John Everett Millais, and Greco-Roman statuary. As a group, The Supper Club’s magical mise-en-scènes document Alba’s community of peers through allegories of creative practice.

This is the first presentation of The Supper Club in Texas. A list of suggested readings related to the project, compiled by the artist, can be found here.

This exhibition is organized by MacKenzie Stevens, Director, Visual Arts Center, with Amy Hauft, Professor, Studio Art, and Taylor Bradley, 2018-19 Visual Arts Center Curatorial Fellow. It is made possible by additional support from the College of Fine Arts and the Art Galleries at Black Studies at The University of Texas at Austin.

Elia Alba (b. 1962, Brooklyn, New York) lives and works in New York City. She received her B.A. from Hunter College in 1994 and completed the Independent Study Program at the Whitney Museum of American Art in 2001. She has had solo exhibitions at the Lower Manhattan Cultural Center, New York (2018); The 8th Floor, New York (2017); Galleria Overfoto, Naples (2010); Black & White Art Gallery, New York (2009); Atlantica TransArt, Santiago, Chile (2005); Jersey City Museum (2003); and Bernice Steinbaum Gallery, Miami (2003), among others. Her work has been included in group exhibitions at the Studio Museum in Harlem, New York (2017); Asian Arts Initiative, Philadelphia (2017); El Museo del Barrio, New York (2016); Smithsonian American Art Museum, Washington, DC (2013); and the 10th Havana Biennial (2009), among others. She is a recipient of numerous awards, including the Joan Mitchell Foundation Grant (2008, 2002); the New York Foundation for the Arts Fellowship Grant (2008, 2002); the Pollock-Krasner Foundation Grant (2002); and the Whitney Museum Van Lier Foundation Fellowship Grant (2001). A book on The Supper Club, produced by The Shelley & Donald Rubin Foundation and published by Hirmer, will be published in March 2019.