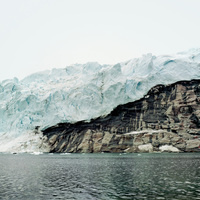 While the Arctic has long been subject to exploration, its very core, the Arctic Ocean, remains an uncharted territory for many. The exhibition Exploring the Arctic Ocean brings together eight diverse projects that rely on the power of visual media to make these unknown waters accessible. The projects—video installations, photographic series, and data visualizations—revolve around the inherent dynamics of the Arctic Ocean’s unique but changing environment, its increasingly important geopolitical role, and its many cultural meanings.

Exploring the Arctic Ocean has been developed alongside the research project “Understanding Arctic System Change Through Synthesis of Hydrographic and Sea Ice Observations from the Early 21st Century,” funded by the National Science Foundation and led by oceanographers An T. Nguyen and Patrick Heimbach at The University of Texas at Austin. The research project combines observational data and numerical models to gain a better understanding of the interrelation of key properties of the Arctic as a physical system, including ocean circulation and temperature, freshwater, ice cover, and the changes of these properties in time. As a centerpiece and starting point for the exhibition, Nguyen and Heimbach produced a rendered video animation in collaboration with visualization specialist Greg Boss from the Texas Advanced Computing Center (TACC) at the University of Texas at Austin. The animation shows a simulation of a phenomenon researchers call “Arctic Atlantification,” the influx of warm water from the subtropical Atlantic into the Arctic Ocean and its increased spreading within the Arctic.

In the exhibition, the data visualization by the Nguyen/Heimbach research group is placed in a dialogue with works by artists Olaf Otto Becker, Chris Linder, Armin Linke, Lize Mogel, John Quigley, ScanLAB Projects and collective work by Ole Kristensen, Annesofie Norn and Daniel Plewe. These works share an interest in the results and practices of scientific research in the Arctic. At the same time, they represent a broad spectrum of visual strategies. Some works document scientific observation and data collection; others visualize and represent the complex changes by which the remote, dynamic and fragile environment of the Arctic Ocean is currently being transformed. Some works unleash activist potential through global media distribution; others aim at triggering personal and individual contemplation.

The exhibition will be accompanied by a series of public programs, including individual talks by the participating artists and a panel discussion. In addition to offering a wealth of information on the Arctic Ocean, the exhibition and programs are conceived as platforms to explore how artistic practices and scientific research work differently, similarly, or jointly to shape our understanding.

Exploring the Arctic Ocean is curated by Ulrike Heine in collaboration with An T. Nguyen and Patrick Heimbach, with the assistance of Alberto Escobedo, III. The exhibition and public programs are made possible by the National Science Foundation, the University of Texas at Austin’s Institute for Computational Engineering and Sciences, the Jackson School of Geosciences, the Institute for Geophysics, the Texas Advanced Computing Center, the Department of Art and Art History, the Center for Space Research, the Moody College of Communication, and the Department of Geography and the Environment. 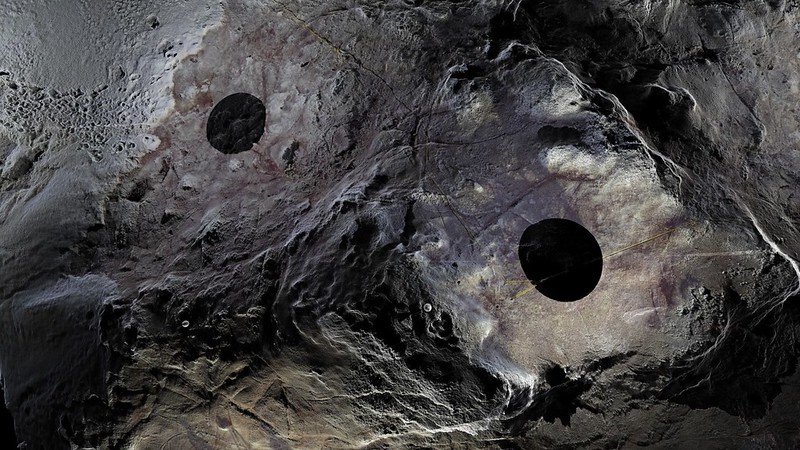 A semester-long series of public programs organized in conjunction with Exploring the Arctic Oceanis dedicated to investigating and discussing the manifold connections between the arts, sciences, and society. The programs are organized in collaboration with a range of departments, schools, and centrs across The University of Texas at Austin. In individual talks, the artists, designers and data visualizers whose work is featured in the exhibition will present their projects. A panel discussion will bring together artists, curators, and scientists to discuss different strategies for intersecting the visual arts and scientific research. Additional programming organized by the Visual Arts Center will address the exhibition’s key themes through engaging, hands-on activities.

Chris Linder is a photographer, oceanographer, and conservation activist. Linder uses photography as “a tool to educate and inspire the public about science and conservation issues.” Since 2002 he has documented more than fifty scientific expeditions. His photographs have been featured in exhibits at the Field Museum and the Smithsonian, among many others. In 2011, Linder published the book Science on Ice, which comprises photographs he took on four Polar expeditions.

Armin Linke is a photographer and filmmaker based in Berlin, Germany. In his projects, he analyses the formation of natural, technological and urban environments. Linke has exhibited widely and has served as a research affiliate at the MIT Visual Arts Program and professor for photography at the Karlsruhe University of Arts and Design. As a fellow of the Thyssen-Bornemisza Art Contemporary-Academy (TBA21-Academy), an itinerant site of cultural production and interdisciplinary research, Linke has been developing his long-term project Oceans.

Olaf Otto Becker is a German photographer. In his photographic series, which he usually develops over a number of years and publishes as photo books, Becker focuses on documenting the impact of humankind on nature using a large-format camera. Between 2003 and 2008, Becker repeatedly traveled to Greenland to document the changing landscape of the Inland Ice as well as along the shoreline.

Lize Mogel is an interdisciplinary artist and counter-cartographer. She has mapped public parks in Los Angeles, future territorial disputes in the Arctic, and wastewater economies in New York City. Mogel is co-editor of An Atlas of Radical Cartography, a project that significantly influenced the conversation and production around mapping and activism. Her exhibitions include the Sharjah (United Arab Emirates), Gwangju (South Korea) and Pittsburgh Biennials, Greater New York (MoMA PS1, New York City), Experimental Geography, and Diagrams of Power (OCAD, Toronto).

Annesofie Norn is a visual artist, scenographer and curator working at the intersection of art, humanitarian development, and public engagement. Her works, which often involve situated engagement, investigate modes of mapping, measuring, and observation. Norn currently leads a long-term project for the United Nations, in which she explores the potential of participative storytelling together with internally displaced families in Gaza.

John Quigley is an artist, producer, and activist. Working with environmental advocacy organizations, Quigley established the genre of aerial art as a “unique mix of human installation, aerial photography, and political activism.” Using materials as well as human bodies, Quigley directs the creation of large-scale patterns and images on land, which are fully revealed when seen from an aerial perspective. He has created more than 200 Aerial Art images involving over 200,000 people on seven continents. In collaboration with Greenpeace and Inuit tribes, Quigley created a series of aerial images in the Polar Regions.

Ole Kristensen is a software artist, programmer, and scenographer. Developing and using new technology to create art works with software at the core, his work ranges from stage performances to large-scale interactive installations. In collaboration with Annesofie Norn und Daniel Plewe, Kristensen created Longing Fast Forward, a long-term “sonic and visual examination” of Arctic daily life as impacted by a changing environment. He is currently artistic consultant at the Space and Polar Program at the Danish Technical University and The Danish Broadcasting Corporation.

Daniel Plewe works in the field of electroacoustic music. He has a specific interest in the spatial distribution of sound. Collaborating with composers and artists, he has created live-electronic systems and spatial concepts for performances as well as installations staged at international festivals and biennials, such as the Biennale di Venezia, Ruhrtriennale, and Expo Shanghai.

ScanLAB Projects is a pioneering creative practice, half art studio half research laboratory, led by artists and architects Matthew Shaw and William Trossell. Working for the Climate Impact Tour with Greenpeace and Cambridge University aboard the icebreaker The Arctic Sunrise from 2011 to 2013, ScanLAB Projects captured 26 ice floes in forensic detail in the Fram Strait, using LIDAR 3D scanning technology. Replicas of the floes and other forensic records were exhibited in Frozen Relic: Arctic Works at the AA Gallery, Royal Academy and Louisiana Museum of Modern Art.

An T. Nguyen is a senior research scientist at the Institute for Computational Engineering and Sciences at The University of Texas at Austin and Principal Investigator of the research project “Understanding Arctic System Change Through Synthesis of Hydrographic and Sea Ice Observations from the Early 21st Century,” which is funded by the National Science Foundation. Nguyen holds a BS in Applied Geophysics from University of California, Los Angeles and a PhD in Geophysics from the Massachusetts Institute of Technology. Her research focuses on understanding the dynamics of the polar climate system, in particular the coupled ocean sea-ice system, through observations and numerical simulations.

Patrick Heimbach is an associate professor at The University of Texas at Austin with appointments in the Institute for Computational Engineering and Sciences, the Institute for Geophysics, and the Jackson School of Geosciences. His research focuses on the ocean circulation and its role in climate, as well as on the dynamics of the polar ice sheets, oceans, and sea ice. He directs the Computational Research in Ice and Ocean Systems (CRIOS) group. Heimbach is a member of numerous international research consortia and has been an invited scientist to convenings of TBA21-Academy.

Ulrike Heine is a visual studies scholar and curator with a focus on the intersection of visual arts and ecology. She completed her PhD with a thesis on climate change-related imagery. From 2013 to 2016, Heine was on the curatorial staff of the MIT Museum in Cambridge, MA, an institution working at the intersection of science, technology, and the arts. She is the curator of Exploring the Arctic Ocean.