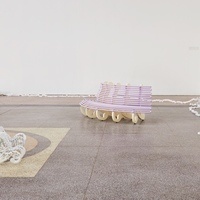 Nancy Lupo: The Square at Noon

Los Angeles-based artist Nancy Lupo combines materials, spaces, and language into intricate networks that resist temporal limitations. Her works sketch out a world that is not unlike our own: perishable, in need of care, and subject to revision. Into these works, she incorporates the quotidian objects that shape contemporary life. Lupo brings these elements together, creating new connections and iterative associations.

This is the first presentation of Lupo’s work in Texas.

This exhibition is organized by MacKenzie Stevens, Director, Visual Arts Center, with Amy Hauft, Professor, Studio Art. The exhibition is generously supported by the Kaleta A. Doolin Foundation with additional support from the College of Fine Arts at The University of Texas at Austin.