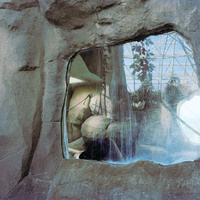 Oozy Rat in a Sanitary Zoo features the work of five artists—Sasha Fishman, Brooke Johnson, Seth Murchison, tín Rodriguez, and Rachel Wilkins—all who are current or recent students at The University of Texas at Austin. The works included in this exhibition examine our human relationships with animals and the natural world, and consider what these relationships might reveal about ourselves. Through a variety of media including photography, painting, sculpture, installation, and video work, these five artists engage ideas surrounding genetic modification, natural and “unnatural” ecology, pets, nature simulations, and the study of natural sciences.

This exhibition is organized by Brooke Johnson and Center Space Project. It is made possible by additional support from 52 individual donors who contributed to a HornRaiser campaign in Fall 2018.

Sasha Fishman  (b. 1995, Baltimore, Maryland) works in Baltimore and will soon be living in Los Angeles. She holds a B.F.A. in Studio Art from The University of Texas at Austin (2018). Her work has been featured in group exhibitions at Shoes Off Gallery, New York (2018); the Visual Arts Center, Austin (2018, 2017); Dude Ranch, Austin (2018);  and No Vacancy 3, New York (2017), among others. Sasha is the recipient of numerous awards, including a grant from The Dallas Museum of Art (2018), a research fellowship from The University of Texas at Austin (2018), and scholarships from Urban Glass and Anderson Ranch. She has participated in the Learning Tuscany program (2017) and the New York Arts Practicum (2018) through UT-Austin.

Brooke Johnson (b. 1996, Fort Worth, Texas) is an artist living and working in Austin, Texas. She is expected to graduate from The University of Texas at Austin in 2019 with a B.F.A. in Studio Art, a B.A. in Art History with Honors, and a Bridging Disciplines Program Certificate in Museum Studies. Brooke is a current member of MASS Gallery and UT’s student-led curatorial collective, Center Space Project, as well as a former coordinator for IRL at the Museum of Human Achievement. Her work has been featured in group exhibitions at the Visual Arts Center (2017) and Dude Ranch, Austin, Texas (2017). She has performed as a member of  Fleet Performance Collective at the Museum of Human Achievement (2017). Johnson is the recipient of numerous awards, including the Newman Fellowship in Art History (2018), UT’s Oxbow Summer Art Program Scholarship (2018), The Katy “Kay” Presidential Endowed Scholarship (2017),  and UT’s New York Seminar Grant (2017), as well as UT’s Professional Development Travel Initiative Grant as a member of Fleet Performance Collective (2017).

Tín Rodriguez  (b. 1996, El Paso, Texas) is an artist and biologist living and working in Western Massachusetts. They received a B.S.A. in Biology from The University of Texas at Austin in 2018. Rodriguez has worked with pollinators in Dr. Elinor Lichtenberg’s lab at The University of Texas at Austin, and with armored scale insects in Dr. Benjamin Normark’s lab at the University of Massachusetts, Amherst. Rodriguez is a volunteer with the insect collections at both UT-Austin and UMass-Amherst, and a member of UT-Amherst’s Fernald Entomological Society. They have exhibited solo work at the West Austin Studio Tour (2018), and have performed as a member of the Fleet Performance Collective at the Visual Arts Center (2018) and the Museum of Human Achievement (2017). Rodriguez co-founded the Austin-based Deadly Toxin (2016-2018) with collaborator Seth Murchison.

Rachel Wilkins (b. 1996, Houston, Texas) lives and works in Atlanta, Georgia. She received her B.F.A. in Studio Art from The University of Texas at Austin in 2018. She was awarded the Welcome to My Homepage Digital Artist Residency at the Museum of Human Achievement in Austin, Texas, which culminated in a solo exhibition in 2017. Wilkins has been featured in group exhibitions at the Rice University’s Inferno Gallery (2018), the Visual Arts Center (2018, 2017); and Dimension Gallery (2017). She currently works with Scraplanta, a nonprofit creative reuse program in Atlanta. Wilkins is the former director and curator for IRL, a new media gallery and production space at the Museum of Human Achievement (2017); her projects were exhibited during Fusebox Festival, Austin Texas (2018, 2017) and Marfa Open, Marfa, Texas (2017).