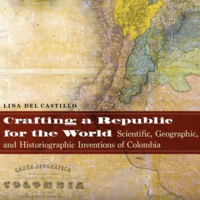 The History Faculty New Book Series and the LLILAS Faculty Book Series present a talk by Assistant Professor Lina del Castillo (LLILAS/History) on her new book Crafting a Republic for the World: Scientific, Geographic, and Historiographic Inventions of Colombia (2018).

In the wake of independence, Spanish American leaders perceived the colonial past as looming over their present. Crafting a Republic for the World examines how the vibrant postcolonial public sphere in Colombia invented narratives of the Spanish “colonial legacy.” Those supposed legacies included a lack of effective geographic knowledge, blockages to a circulatory political economy, existing patterns of land tenure, entrenched inequalities, and ignorance among popular sectors.

Lina del Castillo is assistant professor of History and Latin American Studies. Her research focuses on the intersections between 19th-century republicanism, scientific thinking, the public sphere, and visual culture.

Read more about Crafting a Republic for the World. RSVP to cmeador@austin.utexas.edu to reserve your seat and receive a copy of the reading selection to be discussed. This discussion is part of the Institute of Historical Studies' History Faculty New Book Talk Series.

Sponsored by Institute for Historical Studies in the Department of History, LLILAS Benson Latin American Studies and Collections, and Center for European Studies