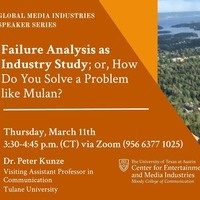 Failure Analysis as Industry Study; or, How Do You Solve a Problem like Mulan?

Dr. Peter Kunze—Failure Analysis as Industry Study; or, How Do You Solve a Problem like Mulan?

Within engineering, failure analysis anticipates or assesses failure during product development in the hopes of preventing it for the future. What value, if any, might this kind of thinking offer media industry studies? In this presentation, I consider Disney’s live-action remake Mulan as a “media failure”—a rare fumble from the global media conglomerate that has produced in recent years a majority of the world’s blockbuster successes. Considering a range of factors and stakeholders, including the Covid-19 pandemic, the political statements of the film’s star, the reception and legacy of the earlier film version, and Disney’s complex relationship with the Chinese government, I intend to show how studying failure often can be as generative as studying major successes—and how media failure itself is often a situated, tentative phenomenon. But failure analysis also risks serving the interests of the media conglomerate that one hopes to examine and critique, so I will also explore what a counterhegemonic praxis may look like.

After the talk concludes at 4:45, Kunze will chat with interested grad students for an additional half hour about careers, research, professional development and more. He welcomes questions!

Peter Kunze is a visiting assistant professor at Tulane University. Kunze’s research and teaching interests include US media history, media aesthetics, industry studies, convergence culture, and children’s media. He sits on the boards of the Literature/Film Association, Studies in American Humor, and Studies in Musical Theatre, and he co-founded the SCMS special interest group for children’s and youth media and culture. He edited The Films of Wes Anderson: Critical Essays on an Indiewood Icon and Conversations with Maurice Sendak, and he co-edited American–Australian Cinema: Transnational Connections. His current book project, Staging a Comeback: Broadway, Hollywood, and the Disney Renaissance, examines the creative and industrial relationships between Hollywood and Broadway.