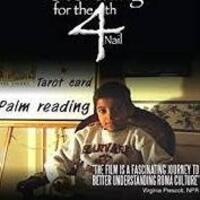 Follow G.S. “George” Eli, an American Rom, as he turns his camera onto the secret life of his Romani culture. As we see through his 8mm family footage, growing up “Gypsy” was 'a pretty good life' – carefree and under the radar. Eli's journey begins when his two sons ask: 'What does it mean to be a Gypsy?" He has no clear answer beyond what he's learned from movies and TV. Eli and his sons begin a quest for the truth. City by city, the roots of old ways begin to reveal themselves in an intricate tapestry of tradition - and oppression. Eli's sons light up the screen with their youthful perspectives on very heavy subjects ranging from the Holocaust Museum to Hollywood and from ancient India to Ellis Island. George and his sons are always fun on-screen, although they confront negative stereotypes and uncover a terrible history of persecution, finally realizing that the only way out is the main thing that their Romani community avoids: conventional education.

6:30 Music by Oliver Rajamani at the PCL plaza