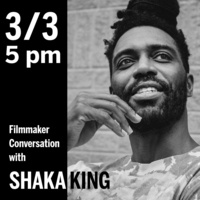 Filmmaker Conversation with Shaka King (“Judas and the Black Messiah”)

Named as one of AFI’s movies of the year and nominated for two Golden Globe awards, Shaka King's Judas and The Black Messiah has been hailed as "a new movie classic that speaks to its time and ours." (Peter Travers).

Judas and The Black Messiah chronicles the FBI’s aggressive infiltration of Chicago’s Black Panther Party which ultimately led to the assassination of its chairman Fred Hampton.

Professor Smith and Shaka King will discuss King‘s film work, his evolution as a filmmaker, and how he uses film to address the most pressing issues of our time.

Before the talk, we recommend that, if possible, attendees watch Judas and the Black Messiah—now streaming on HBO.

RSVP to join the conversation.

RSVP for Zoom link and info.