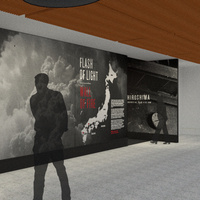 On Aug. 6, 1945, the US dropped an atomic bomb on Hiroshima. A second bomb was dropped three days later just north of Nagasaki. Over 50 Japanese photographers documented the immediate aftermath, a visual record of nuclear destruction and the mass suffering that ensued. The Anti-Nuclear Photographers’ Movement of Japan collected the images, which now comprise the center’s Hiroshima and Nagasaki Atomic Bomb Photographs Archive. "Flash of Light, Wall of Fire" is a powerful exhibit based on these photos.