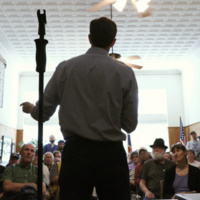 Join us for a special screening of RUN LIKE THE DEVIL, a documentary created by Austin film maker Steve Mims that follows the campaign trails of Texas candidates for U.S. Senate Ted Cruz and Beto O'Rourke.

ADMISSION POLICY
Admission to this event is free, but registration is required (registration available on link below). You must arrive by 5:45PM to claim your free ticket. Unclaimed tickets will be released to the walk-up line. Online registration will end at 12 noon on October 3.

A limited number of tickets will be available at the door on a first come, first served basis. The line for walk-up tickets will form when the first person arrives.