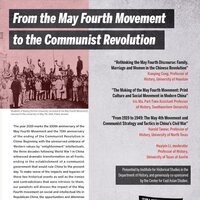 The year 2019 marks the 100th anniversary of the May Fourth Movement and the 70th anniversary of the ending of the Communist Revolution in China. Beginning with the unreserved embrace of Western values by “enlightenment” intellectuals, the three decades following World War I in China witnessed dramatic transformation on all fronts, ending in the establishment of a communist government that would rule China to the present day. To make sense of the impacts and legacies of these two historical events as well as the ironies and contradictions that were intrinsic to them, our panelists will discuss the impact of the May Fourth movement on social and intellectual life in Republican China, the opportunities and dilemmas that confronted Chinese women in their involvement in the Communist Revolution, and the strategy and tactics behind Communist success in the Civil War in 1949.

"Rethinking of the May Fourth Discourse: Family, Marriage and Women in the Chinese Revolution"
Xiaoping Cong
Professor of History, University of Houston

"The Making of “Youth” in Modern China: Reflections on the May Fourth Movement"
Iris Ma
Postdoctoral Fellow and Lecturer, Lyndon B Johnson School of Public Affairs, University of Texas at Austin

"From 1919 to 1949: The May 4th Movement and Communist Strategy and Tactics in China’s Civil War"
Harold Tanner
Professor of History, University of North Texas

Free and open to the public. RSVP to reserve your seat, please email: cmeador@austin.utexas.edu.

Sponsored by: Center for East Asian Studies; Institute for Historical Studies in the Department of History