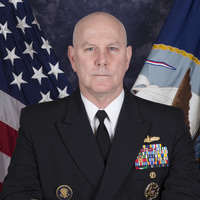 On February 4, the Clements Center for National Security, Strauss Center for International Security and Law and the Intelligence Studies Project will host Admiral Chris Grady, Commander, United States Fleet Forces Command, for a talk on "Great Power Competition: A Maritime Century” at the University of Texas.

Adm. Chris Grady is a native of Newport, Rhode Island. He is a graduate of the University of Notre Dame and was commissioned an ensign through the Naval Reserve Officers Training Corps program. Grady is a distinguished graduate of Georgetown University, where he earned a Master of Arts in National Security Studies while concurrently participating as a fellow in Foreign Service at the Edmund A. Walsh School of Foreign Service. He is also a distinguished graduate of the National War College earning a Master of Science in National Security Affairs.

Ashore, Grady served in numerous policy, strategy, legislative and operations staff and aide billets with the Joint Chiefs of Staff, the Chief of Naval Operations staff, and Chief of Legislative Affairs. Additionally, he served as the deputy executive secretary of the National Security Council in the White House.