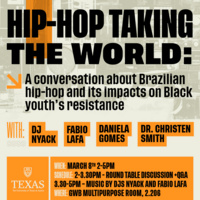 Hip-hop taking the world: A conversation about Brazilian hip-hop and its impacts on Black youth’s resistance

" Hip-hop taking the world: A conversation about Brazilian hip-hop and its impacts on Black youth’s resistance"

Light refreshments will be served!

In the early 1980s, one of the largest cities in the world observed the rise of a movement that would change a generation. In 1984, in the steps of the São Bento subway station in São Paulo, Brazilian hip-hop emerged. Challenging the concept of the local/global dichotomy and the myth of imported cultures, hip-hop in Brazil developed its own characteristics and became one of the main expressions of Afro-Brazilian youth resistance. Over the years, its main expression, “rap nacional” (Brazilian rap music) became synonymous with activism and a tool of Black youth empowerment. In this mixture between music and conversation, Dr. Christen Smith and AADS Ph.D. candidate Daniela Gomes talk to world renowned São Paulo Brazilian DJs Nyack and Fabio Lafa about Black Brazilian resistance through hip-hop. Come listen, groove and learn as they use the turntables and their cultural memory to share the dynamism of Black Brazilian culture.

Sponsors: The Warfield Center and The Brazil Center present

One of the youngest DJs in Brazil, DJ Nyack already presents impressive achievements in his career. Working with rapper Emicida since 2007, Nyack also works in other successful projects such as Discopedia and other hip-hop parties, in Brazil and abroad. The DJ also produces the podcast Frequencia Modulada, in addition to mixtapes with his work and the work of other artists who influence him.

His experiences as part of Sao Paulo’s urban music scene and his relationship with record stores in the city, since the early 1990s, guaranteed to Fabio Lafa a place as one of the producers and presenters of the podcast Frequencia Modulada.