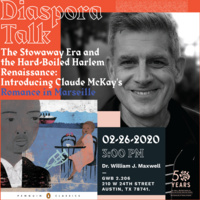 Join the John L. Warfield Center for African & African American Studies for a talk with Dr. William J. Maxwell on Claude McKay's novel Romance in Marseille, which had been buried in the archive for almost 90 years. Books available for purchase.

ABOUT ROMANCE IN MARSEILLE

The pioneering novel of physical disability, transatlantic travel, and black international politics. A vital document of black modernism and one of the earliest overtly queer fictions in the African American tradition. Published for the first time.

Buried in the archive for almost ninety years, Claude McKay’s Romance in Marseille traces the adventures of a rowdy troupe of dockworkers, prostitutes, and political organizers–collectively straight and queer, disabled and able-bodied, African, European, Caribbean, and American. Set largely in the culture-blending Vieux Port of Marseille at the height of the Jazz Age, the novel takes flight along with Lafala, an acutely disabled but abruptly wealthy West African sailor. While stowing away on a transatlantic freighter, Lafala is discovered and locked in a frigid closet. Badly frostbitten by the time the boat docks, the once-nimble dancer loses both of his lower legs, emerging from life-saving surgery as what he terms “an amputated man.” Thanks to an improbably successful lawsuit against the shipping line, however, Lafala scores big in the litigious United States. Feeling flush after his legal payout, Lafala doubles back to Marseille and resumes his trans-African affair with Aslima, a Moroccan courtesan. With its scenes of black bodies fighting for pleasure and liberty even when stolen, shipped, and sold for parts, McKay’s novel explores the heritage of slavery amid an unforgiving modern economy. This first-ever edition of Romance in Marseille includes an introduction by McKay scholars Gary Edward Holcomb and William J. Maxwell that places the novel within both the “stowaway era” of black cultural politics and McKay’s challenging career as a star and skeptic of the Harlem Renaissance.