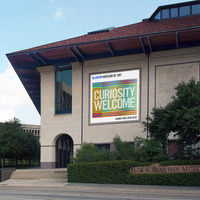 Jeffrey Gibson: This Is the Day

Jeffrey Gibson: This Is the Day highlights new developments in the artist’s genre-bridging practice. The exhibition features over fifty works made between 2014 and 2018 including intricately beaded wall hangings and punching bags, paintings, ceramics, garments, helmets, and a new video commissioned for the exhibition, I Was Here (2018). The film follows Macy, a trans-Choctaw woman living on a reservation in rural Mississippi, melding documentary and fantastical elements in a way that harkens back to independent films from the 1980s and 90s such as “Bagdad Cafe” (1987) and “My Own Private Idaho” (1991).

In his work, Gibson (b. 1972; based in Germantown, New York) brings together his Choctaw and Cherokee heritage and a range of diverse artistic and cultural influences to explore race, sexuality, religion, and gender. Gibson’s art often joins exuberant colors, patterns, and materials with text borrowed from such authors as James Baldwin and Simone de Beauvoir or song lyrics by Grace Jones, Boy George, and other musicians. These combinations highlight the unexpected connections between ceremonies and performances found in Native American powwow rituals, dance clubs, and drag shows, underscoring the complex vitality of Gibson’s eclectic sources.

This exhibition will be on view in our Butler Gallery, located on the ground floor of the museum.

This Is the Day is organized by the Ruth and Elmer Wellin Museum of Art at Hamilton College in Clinton, New York.

The Blanton’s presentation is organized by Veronica Roberts, Curator of Modern and Contemporary Art, Blanton Museum of Art