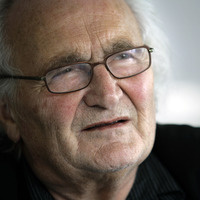 Join The University of Texas School of Architecture for a lecture with Herman Hertzberger, AHH, Amsterdam,

“The Challenge for Architecture to Be More Socially Conscious and Concerned”

Dutch architect Herman Hertzberger graduated in 1958 from what is now the Technical University of Delft and established his architectural practice in 1960. His most famous designs include the Centraal Beheer head office in Apeldoorn, the Vredenburg Music Centre in Utrecht, The Ministry of Social Affairs and Employment in The Hague, and the Chassé Theater in Breda. He is known for his many cultural buildings, schools, and residential buildings. In 2012, he was awarded the Royal Gold Medal from the Royal Institute of British Architects (RIBA). He also received the esteemed Thomas Jefferson Foundation Medal in Architecture in 2015, the ARC19 Oeuvre Award in 2019, and the Royal Scottish Academy Metzstein Discourse Medal for Architecture in 2021. His latest book Architecture and Structuralism attempts to formulate what structuralism means in architecture and why it matters, given a new impulse toward the discussion about sustainability and a blueprint for a more democratic architecture.