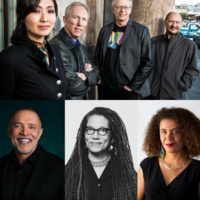 Kronos Quartet: At War With Ourselves – World Premiere

For over 45 years, San Francisco’s Kronos Quartet – David Harrington (violin), John Sherba (violin), Hank Dutt (viola), and Sunny Yang (cello) – has pursued a singular artistic vision, combining a spirit of fearless exploration with a commitment to continually reimagine the string quartet experience.  In the process, Kronos has become one of the most celebrated and influential groups of its generation, performing thousands of concerts worldwide, releasing more than 60 recordings of extraordinary breadth and creativity, collaborating with many of the world’s most accomplished composers and performers, and commissioning more than 1,000 works and arrangements for string quartet.

At War With Ourselves is an evening-length work for string quartet, chorus, and spoken word. The music is composed by Michael Abels, who is best-known for his scores for the Oscar-winning film Get Out and for Jordan Peele’s Us, for which Abels won multiple critics’ awards and nominations.  The hip-hop influenced score was short-listed for the Oscar, and named “Score of the Decade” by online publication The Wrap.