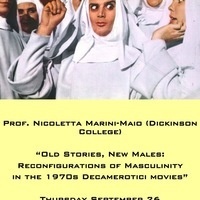 This presentation examines figurations, plots, and characters from the so-calle Decamerotici movies, a cinematic sub-genre of about fifty Decameron-style B-movies produced in Italy in the early 1970s. Marini-Maio considers the decamerotici as they gained enormous success among the audience and contributed to establish the popular trend of the “commedia erotica all’italiana” (erotic comedy Italian style), which has been regularly broadcast in Silvio Berlusconi’s network televisions since the early 1980s. Rooted in the Italian literary tradition and functioning as a carnivalesque medieval society, the world portrayed in the decamerotici is inhabited by sensual and docile hyperfeminine women always available to sexual encounters. Several film critics and experts of the genre, such as Marco Giusti, Stefano Loparco, and Giordano Lupi, have claimed that by centering on the naked bodies of female subjects who desired, performed, and explicitly enjoyed sexual intercourse, the decamerotici exerted a liberatory effect on the moralistic and censoring attitude of Italian society towards sexuality. Marini-Maio calls for a reconsideration of this position and discusses the decamerotici as a reflection of the processes of reconfiguration of masculinity based on consumerism, urban life, and steep increase of heterosexual encounters that took place during the economic boom in Italy, in the late 1960s.

free and open to the public