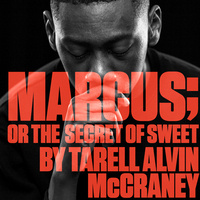 Marcus is sixteen and "sweet." Days before Hurricane Katrina strikes the housing projects of Louisiana, the currents of his life converge, overflowing into his close-knit community and launching the search for his sexual and personal identity on a cultural landscape infused with mysterious family creeds. Marcus;or the Secret of Sweet is the stirring conclusion of Tarell Alvin McCraney's trilogy, The Brother/Sister Plays.

Premiered in 2009 at The Public Theater and McCarter Theatre Center, Marcus;or the Secret of Sweet is the poignant, final installment of McCraney's acclaimed trilogy. "I lived in the other America, the America that doesn't always get depicted in the cinema. The America that we are told to pretend isn't there," shares playwright Tarell Alvin McCraney. "In an attempt to create theater that told untold stories, that gave voice to another half of America, I created The Brother/Sister Plays."