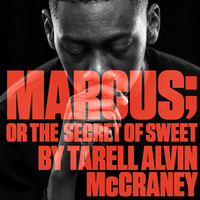 Marcus is sixteen and "sweet." Days before Hurricane Katrina strikes the housing projects of Louisiana, the currents of his life converge, overflowing into his close-knit community and launching the search for his sexual and personal identity on a cultural landscape infused with mysterious family creeds. The provocative, poignant and fiercely humorous coming-of-age story of a young gay man in the South, Marcus; or the Secret of Sweet is the stirring conclusion of The Brother/Sister Plays by Academy Award-winning playwright and screenwriter, Tarell Alvin McCraney (Moonlight).

Described as "one of the most startling new voices to emerge in the American theatre," McCraney's plays often embody the voices of those historically silenced to weave multidimensional stories infused with mythology, poetry and ritual. "I lived in the other America, the America that doesn't always get depicted in the cinema. The America that we are told to pretend isn't there," shares McCraney. "In an attempt to create theater that told untold stories, that gave voice to another half of America, I created The Brother/Sister Plays."

College of Fine Arts, Department of Theatre and Dance

$26 for adults, $21 for University of Texas at Austin faculty/staff and $15 for students