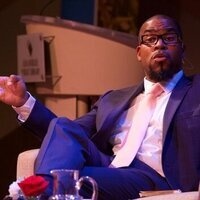 "The Spectacle of Lynching Redeployed: On the Performance of Democratic Regard"

America’s history is marked by a striking image—“black bodies swinging in the southern breeze.” Abel Meeropol—a Jewish American—first articulated this line in his 1937 published poem, “Bitter Fruit,” after viewing Lawrence Beitler’s horrific lynching photograph. Although Meeropol eventually put the words to music, it was jazz singer Billie Holiday’s haunting rendition of the song, now titled “Strange Fruit,” first recorded in 1939 that made it a classic. How does one practically and conceptually engage the simultaneous existence of a professed commitment to equality and liberty alongside the fact that white Americans visually digested those with whom they otherwise shared the polity? I engage this vexing issue by reflecting on the normative possibilities latent in Holiday’s performative rendition of Meeropol’s song.

Dr. Melvin Rogers is an Associate Professor of Political Science at Brown University. He is the author of "The Undiscovered Dewey: Religion, Morality, and the Ethos of Democracy" (Columbia University Press, 2008) and co-editor of "African American Political Thought: A Collected History" (University of Chicago Press, forthcoming). His articles have appeared in major academic journals as well as popular venues such as Dissent, The Atlantic, Public Seminar, and Boston Review. Rogers serves as the co-editor of the New Histories of Philosophy series at Oxford University Press. Presently, he is at work on his second book, "The Darkened Light of Faith: Race, Democracy, and Freedom in African American Political Thought."

The Media Ethics Initiative is part of the Center for Media Engagement at the University of Texas at Austin.

Media Ethics Initiative events are free and open to the public.