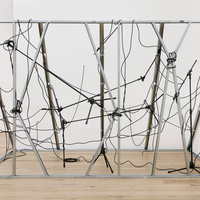 Acoustic foam, felt, audio cable, and music stands are materials Los Angeles-based artist Nikita Gale often employs to visually articulate the mechanics of sound and to point to the intertwined histories of politics and “the crowd.” Gale’s large, multi-part installations are also informed by the relationship between histories of protest and the urban landscape and, more recently, new theories about mass communication, social relationships, and listening. Gale’s work features familiar forms, such as crowd control barricades, that signify control and power; however, the artist reconfigures these items in new orientations which grant them new currency and meaning. Gale’s site-responsive installations consider the specific architectural features of a site, drawing our attention to the corners, the seams, the edges, and other interstitial spaces that are often overlooked but are integral to the structural foundation of the building. EASY LISTENING considers how the new or unfamiliar can quickly become normalized and mainstream, shedding potency or radicality along the way. Everyday materials, such as concrete or music categorized as “easy listening,” fade into the background, droning within the structures of contemporary life.

All programs are free and open to the public.