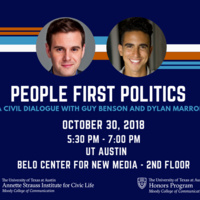 Guy Benson is a well-known millennial conservative and co-author of “End of Discussion,” whose work is praised by the likes of Fox News hosts Tucker Carlson and Dana Perino. Dylan Marron is a passionate critic of transphobia and the underrepresentation of minorities, famous for webcasts with titles like “Sitting in Bathrooms with Trans People” and “Conversations with People Who Hate Me.”

Though they seem to be worlds apart politically, both believe strongly in fostering meaningful conversation through mutual respect. Join us on Tuesday, October 30th at the Belo Center for New Media as we learn about how two media sensations are bridging the divide and tackling tough topics, one conversation at a time.

Sponsored by the Annette Strauss Institute for Civic Life and the Moody College Honors Program, the event is meant to promote their shared missions of fostering civic engagement and critical dialogue on matters of public importance, and in particular among the students who will be tomorrow’s leaders.

Guy Benson is the political editor of Townhall.com and a Fox News contributor. He co-authored the book “End of Discussion” in 2015, which charges the political left with manufacturing outrage to silence their political opponents in public, on college campusues and on social media. He is a familiar voice on the Hugh Hewitt radio show, a contributor to NPR’s “All Things Considered,” and co-host of the forthcoming “Benson and Harf” on Fox News Radio.

Dylan Marron is the creator of Every Single Word (Tumblr's "Most Viral Blog" of 2015), a video series that edits down popular films to show only the words spoken by people of color. For Seriously.tv, Dylan created, hosted and produced “Sitting in Bathrooms with Trans People,” “Shutting Down Bullsh*t,” and the “Unboxing” series. He currently hosts and produces “Conversations with People Who Hate Me,” a podcast in which he has phone conversations with those who insult him on the internet, and which won a Webby Award and special mention by USA Today, The Guardian and Fast Company.