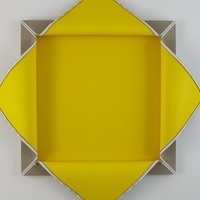 Donald Moffett, whose paintings and prints are currently on view at the Blanton, discusses growing up in San Antonio, and his career as an artist and an activist based in New York with acclaimed novelist and art critic Jim Lewis. Lewis has written about Moffett's work, What Barbara Jordan Wore, a 2001 series of digital prints exploring the legacy of the Texas politician.

Admission is always free on Thursdays