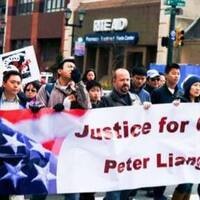 Peter Liang, a Chinese American NYPD officer shot and killed Akai Gurley, an unarmed, Black man in a Brooklyn housing project. Liang was convicted of second-degree manslaughter and official misconduct.  His conviction aroused divided responses in the Asian American community. Some Asian Americans feel that Liang has been used as a political concession to Black Lives Matters' protestors. Many other Asian Americans, however, have taken a more radical stance and been mobilizing to hold all police accountable. They stand for broader racial justice in solidarity with communities of color and the Black Lives Matters movement.

Please join us this Thursday evening for a community conversation on Asian American organizing, police brutality in communities of color, interracial solidarity organizing, and the challenges and opportunities around these issues.