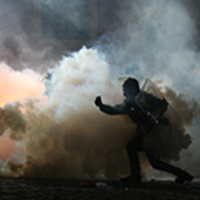 Political Violence in the Age of Trump

On Tuesday, February 5, 2019, the Strauss Center for International Security and Law is pleased to present Shirin Sinnar, Associate Professor of Law and John A. Wilson Faculty Scholar at Stanford Law School, for a talk on "Political Violence in the Age of Trump." From Charlottesville to Pittsburgh, resurgent white nationalism and new acts of domestic terrorism have prompted calls for new laws to respond to political violence.  Should there be new domestic terrorism laws?  Are hate crimes laws a useful response to violence directed at victims’ identities?  Professor Sinnar will address how the law should—and should not—adjust to evolving threats while protecting core values of liberty, equality, and accountability. This is part of the Brumley Speaker Series.

Shirin Sinnar is Associate Professor of Law and John A. Wilson Faculty Scholar at Stanford Law School. Her scholarship focuses on the role of institutions, including courts and executive branch agencies, in protecting individual rights and democratic values in the national security context.  Her scholarship also addresses the procedural dimensions of civil rights and national security litigation, domestic intelligence-gathering and terrorist watchlists, and the impact of terrorism law and policies on U.S. minority and immigrant communities.  Sinnar’s articles have been published or are forthcoming in the California Law Review, Georgetown Law Journal, Harvard Law Review, Stanford Law Review, Harvard Civil Rights-Civil Liberties Law Review, and other journals.  In 2017, she was the co-recipient of the inaugural Mike Lewis Prize for National Security Law Scholarship for her article, The Lost Story of Iqbal. From 2004 through 2009, she represented individuals facing discrimination based on government national security policies and unlawful employment practices, first as an Equal Justice Works Fellow at the Lawyers’ Committee for Civil Rights of San Francisco and then as a staff attorney with the Asian Law Caucus.   Sinnar previously served as a law clerk to the Honorable Warren J. Ferguson of the Ninth Circuit Court of Appeals.  She is a graduate of Stanford Law School (J.D. 2003), Cambridge University (M. Phil. International Relations 1999), and Harvard and Radcliffe Colleges (summa cum laude, A.B. History 1998).