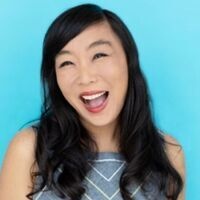 Join the Center for Asian American studies and the Gender and Sexuality Center for a Luncheon, Keynote, and Q&A with Kristen Meinzer!

Kristen Meinzer is an award-winning host, producer, and former director of nonfiction programming for Slate’s sister company, Panoply. Her hosting credits include By the Book; We Love You (And So Can You); CNN's Lisa, Sandra, and Kristen Go To The Movies; When Meghan Met Harry; and Movie Date. Her producing credits include Happier with Gretchen Rubin, The Sporkful, Girlboss Radio, Vanity Fair's Little Gold Men, Food 52's Burnt Toast, and other award-winning shows. Kristen is the author of "So You Want to Start a Podcast," which Publishers Weekly called "invaluable." Her work has been celebrated in Time, The Washington Post, Bust, Buzzfeed, Vice, The Guardian, The Evening Standard, Real Simple, Indiewire, and dozens of other publications. She lives in Brooklyn, New York.

She says "I've been told I don't have a face for TV or a voice for radio. I've been told I talk like a baby, a whiner, and a character from the movie "Fargo." More than one person has said to me, "that's not how an Asian person talks," or "you don't sound like you look." And at over half the conferences I've spoken at, I've been the only woman of color on stage.
My story isn't particularly unique. 96% of film directors are men. 72% of lead characters in films are men. 63% of speaking characters in films are men. 84% of Pulitzer Prize recipients are men. 77.5% of Fortune 500 board seats are held by men. And two thirds of podcasts have at least one white male host. In other words, we live in a world where men are given platforms to speak, and where they're taken seriously when they do.
But it's these numbers that make me more determined to speak loudly and widely, and often at the risk of rocking the boat. It's these numbers that fill me with anger, about who, historically, has been given the power to tell my story, and tell women's stories more broadly. I believe my voice is my most transgressive tool. I believe our unique stories can change the world. And I believe we live in a time when there are more ways than ever that we can be heard."

College of Liberal Arts, Division of Diversity and Community Engagement