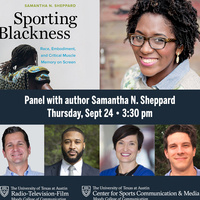 Sporting Blackness examines issues of race and representation in sports films, exploring what it means to embody, perform, play out, and contest blackness by representations of Black athletes on screen. By presenting new critical terms, Professor Sheppard analyzes not only “skin in the game,” or how racial representation shapes the genre’s imagery, but also “skin in the genre,” or the formal consequences of blackness on the sport film genre’s modes, codes, and conventions. Through a rich interdisciplinary approach, Sheppard argues that representations of Black sporting bodies contain “critical muscle memories”: embodied, kinesthetic, and cinematic histories that go beyond a film’s plot to index, circulate, and reproduce broader narratives about Black sporting and non-sporting experiences in American society.

Dr. Sheppard is the Mary Armstrong Meduski '80 Assistant Professor of Cinema and Media Studies in the Department of Performing and Media Arts at Cornell University in Ithaca, NY. A cinema and media studies scholar, professor, and writer, her research interests include Black cultural production and production cultures, African American representation in cinema, sports films, and feminist media studies.