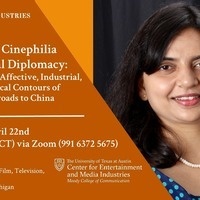 Focusing on Chinese film and social media platforms such as Douban, M-Time and Weibo, this paper offers a discursive analysis of Khan’s fandom in China. It hones in on the affective terms of engagement of the Chinese users and their fandom’s intersections with India’s intangible, affective soft power and the circulation of Bollywood as a malleable cultural form. It also explicates the ways in which this discursive fandom points to an inclusion of democratic values and a perception of parallel modernities in relation to larger issues pertaining to education, women empowerment, infrastructural divide between rural and urban regions that both neighboring Asian economies contend with. While cinema is often thought to be peripheral to geo-politics, the case of Aamir Khan’s fandom in China carves out a new discursive space for star-led affective power that extends star power to the realm of cultural diplomacy.

After the talk concludes at 4:45, Rai will chat with interested grad students for an additional half hour about careers, research, professional development and more. Rai welcomes questions!

Swapnil Rai is an Assistant Professor in the Department of Film, Television and Media at the University of Michigan, Ann Arbor. Her research focuses on global film and television, media industries, women and gender studies, race and ethnicity, transnational stardom, and celebrity culture. Her current book project examines the history of global flows of Indian films and the role of stars in Bollywood production culture and industry globalization.